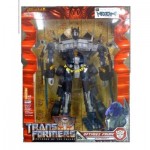 Amazon Japan and Tatsuya Japan have recently added links to the exclusives available in Japan with the purchase of a Revenge of the Fallen DVD or Blu-ray. First up are two versions of the Revenge EZ Collection (Legends Class) Bumblebee in Stealth or Clear decos exclusive to Tatsuya. The clear version will be available only with the Bumblebee Case Premium DVD Edition, while those who preorder now will recieve the Stealth deco as a free gift. Next but not least, is a new version of Revenge Leader Optimus Prime in black and dark grey colors with gold flames. The japanese release date for the DVD and Blu-ray is December 18.

Takara-Tomy has released more info on their site, including the Lawson Exclusives Skids “Desert Version” and Mudflap “Desert Version.” Both are deluxe class repaints of the general line Revenge figures.

UPDATE: New Amazon Exclusive Optimus Prime images combined with Jetfire have surfaced. Click above to see them now added to our gallery.

now I wonder what might come with the IMAX version…

I just got mine this morning too! What a great Saturday morning. I have posted in junkion that I have the mini blackbumblebee and dvd for sale. PM me for and make an offer!

Ah man, Prime is bad A in black and blue.

Mine just got delivered today…

SALES NOTE: IF ANYONE IS LOOKING FOR THE JAPANESE ROTF DVD…GOT ONE FOR SALE>>>PM ME!!! STILL FACTORY SEALED..had no interest in it…just wanted the transformers….

So damn sexy. Can't wait to get mine!

Hasbro will probably release some kind of variance of black prime given their track record.. But not like this. But a black buster Prime would be epic!!!

I'm counting on this happening… It MUST! Seriously though, I bet they will. If not for this movie then probably the next.

Mine came it today. I haven't opened though. I'll probably wait till after Christmas. I have a stack of toys I still haven't opened.

Hasbro will probably release some kind of variance of black prime given their track record.. But not like this. But a black buster Prime would be epic!!!

cant wait for my op to show up, sooooo awesome looking!!!

Just got home and mine were here also. That was extremly quick shipping. They used FedEx before 10:30 guarantee. My MP-01B also showed today so it was my black friday.

Anyone see the supplemental instructions? Is it me or does that Prime look Black with Red Flames. Or are the colors just off in the photos?

Here are some pics:

That's probably the only time I'll ever put him in truck mode; I expected those chest tabs to snap at any second…

Just got mine today also. Thankfully it came with that legends BB.

Shipping was real fast and very well packaged. Amazon impresses me once again.

That is great dude

Amazon is really great like that. I find when you pre-order stuff, they know when to send it out so it gets there the day of.

I found that especially cool b/c it was shipped from Japan and made it here in 2 days. I do love efficiency.

I didn't think that Buster Optimus Prime could be beat…but this is definitely my new favorite Leader OP. The black and gold is a really nice deco; a good departure from the standard "Nemesis Prime" colors of black and teal. The cobalt blue plastic works, too, as it matches with Jetfire's colors. I really like the electric blue energy swords. If nobody's done a pictorial review by this evening, I'll have one up. This was definitely worth the ridiculous price.

That is great dude

Amazon is really great like that. I find when you pre-order stuff, they know when to send it out so it gets there the day of.

Mine just arrived from Amazon-Japan a few minutes ago. That is simply amazing. It was supposed to be released today (yesterday in Japan) and I have it in my hands from Japan on the release day (ok, really the day after). I never get stuff from Amazon-US this fast.

Pics coming in just a minute.

Well mine are in Philly with a new estimated delivery of TODAY !!!!! before 10:30, too bad I'm leaving for work or…….cough…….cough……..maybe I'm feeling a little under the weather. My Black MP Primes are scheduled to delver today too.

im the first to say please bring to states… but honestly I have most of all the movie/animated/universe stuff in package from past two years of collecting serious. I would love to see this as well as anything overseas stay exclusive. If you really want it to play or collect… gotta pick and choose which to get and leave aside. I've personally skipped the 25th aniversary prime and was passing on skywarp Wal mart (until it was 40 bucks) to get this black one. i've been deciding on it for months. IT'S UP THERE WITH THE BUSTER AND MP I HAVE FOR COOLNESS!!! BEST OP'S IMO.

I HEARD BECASUE IT'S AMAZON IT'S MOLD AND COLOR SCHEME WILL NOT BE ALTERED TO A HASBRO AMERICAN VERSION. What was the Nightwatch exclusive to in UK? I wonder how they choose. So far OP, starscream and skywarp have MP from wal mart. But lawson stuff doesn't make it over hear… The gold metallic bumblebee ect… anyone know ???

i ordered mine. a couple days ago. Hope I get the black stealth legends
Bee!!!! that helped my purchase. anytime you get Bee stuff included. sweet. i'll get mine bwtween 22-24.

Exactly. This is why you should buy what you LIKE, not invest. If people want to invest, they should seek the advice of a broker. Toys can increase in value, and it is always a nice bonus when they do. But always be prepared to see your purchase decrease in value. That is the reason you should enjoy what you own, not enjoy what it is worth.

I understand exactly what you are saying and that is why I have all the main-line TFs for their play value. Stuff like this guy, BT-17 Black Convoy, BT Mirage, etc I get for their value as well as their rarity. Personally, I like having figures that are hard to find and that probably will increase in value over time. Sure, most of the main-line stuff actually goes down in value, but I do have quite a few collectibles and I include this exclusive Prime among their number. Of course, it doesn't hurt that black Prime's are one of my favorite recolors and I try to get as many as possible, so there is that as well.

I do collect TFs b/c they are fantastically fun and marvels of engineering (especially this mold), but it can't hurt to get them for their monetary value as well. Hell, I don't ever plan on selling any of them from my collection, but it is nice to know that something I bought for say $80 (BT Mirage) is worth close to $200 or so.