San Diego Comic Con 2009 is just beginning, and so we have our second batch of images from the Hasbro Transformers Display. The display is very similar in layout to the one shown at Botcon, with only a couple of extra items which we showed you yesterday. Please check back often for updated clear images of the complete booth. 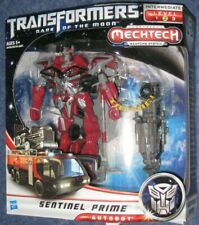 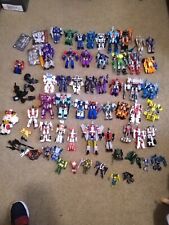 Hasbro really seems to have an affinity for Deadend, (Wildrider

); or what every they want to call him these days. How many forms are they going to give him. Just in the ROTF line alone they so far have him as a Pontiac Solstice like Jazz in the Titanium 2-pack with Cliffjumper not to mention the Scout class and Deluxe class versions. Don't get me wrong though, I think they are all great, it's just that I don't get why they just seem to keep rehashing the same character with different forms in the same line?

On another note though, Bludgeon and MP Skywarp are my must haves for sure!!!

Movie Lockdown is so mine.

It looks like Bludgeon merely needs new feet to fit in with Universe, sweet. As for better pics, Tony said he'd upload bigger better photos, so just be patient guys.

I hate to be the one to bring the negativity, but I gotta say, kinda disappointed with most of these. Same old, same old.

They don't feel fully sure of themselves with most of these. They neither fit the movie style or the classic style. Wishy-washy.

Like you, i am normally not a Debbie Downer but I am not feeling any of these. I'll probably get a couple Animated (Rodimus and Arcee) but I am done with the movie line. But on the plus side at least I'll either save some money or work on building my G1/Encore/reissue collection.

Wish we would've gotten some Classics or Leader Starscream news.

Only gem I found was the possiblity for a reissue Blaster.

Looks like he has a giant handcuff on the end of one arm – at least in that pic.

If there are no better pics by tonight, and I'm not totally drunk/wasted, I'll see what I can do about getting panel pics out of my camera, and up somewhere for viewing. Can't promise they're actually any good, though some seem decent on my crappy camera viewer (and I don't have Photoshop on this tiny laptop).

Yes, I went back and re-edited my post; I was GUESSING that was a Buster Prime question, but it's fucking Takara, so it could've been damn near anything. My apologies for guessing and possibly confusing people; you should assume there's NO news about it until someone else reports in. I wish they'd had a damn audience mic.

Ratchet with a weapon? Kewl.
A weapon to be shared with Lockdown? Even more so.
Brawn? Weee!

Especially Ironhide. I plan on Frankensteining the original TF07 figure with bits and pieces from this guy and do my best to make a Masterpiece Ironhide.

Barricade might just be the best figure of the line. And that's saying something.

I love that we're getting Simmons. Though I find it odd that they paired him with Mudflap when most of his scenes were with Skids.

Still nothing on Lennox and Ironhide.

Animated — plan to bring out ALL announced toys:

Deluxe Electrostatic Soundwave w/Ratbat (white version is coming as an Activator), Arcee (sword weapons which didn't appear in show; "kinda like female Jedis"), Rodimus Minor (burgundy, NOT black; originally going to be a Prime, but felt there were too many Primes in the story, so de-ranked – 1st non-Prime to command a squad), Cybertronian Ratchet, Cybertronian Ironhide (yes, he will have his own head sculpt), Fugitive Waspinator (repaint of Deluxe BB; didn't have money for a new head sculpt; spinning it as he "stole BB's helmet" in the bio)

I'm loving what I hear here. I won't be getting Waspinator since the head isn't remolded. I give 'em credit for the bio thing, however. That's pretty smooth, especially on a tight budget.

Hydrodive Bumblebee is adorable.
Blackout is just badass.
Wingblade Optimus…steals the friggin' show. He is incredible. Wait. The new parts will fit on the original Voyager? FUCK YES.

Redeco of Devastator is under consideration.

Buster Prime, there's "nothing definitive" in terms of bringing it over.

"I have to believe there will be a 3rd movie at this point", developing a new series for animation, but everything's up in the air — Archer.

Re-release of Blaster + tapes "comes down to what condition the molds are in; even when Takara releases them, sometimes Hasbro can't (?)"

Good thing I didn't bank on Buster Prime. Maybe we aren't receiving Premiums this time around…

Whether or not Archer's in the loop, there's going to be a 3rd film. It was said on the boards here that Bay signed on for 5, he wants to do it in 2012, Paramount wants 2011, etc. Not to mention the current film's box office take.

As for a Blaster/Cassettes reissue, I'm sure it's a mix of licensing and safety requirements.

So it'll still be there, just no way of finding out how the hell to get to it? No thanks. It's bad enough transforming any ROTF toy without instructions, combining 3 is a whole story in itself!

I still won't be getting Arcee though. That was the whole reason for getting all of the bikes; for the combined mode. The real problem here though is that the third bike wasn't even shown and all we got out of it was "we have plans". Plans? How about even a prototype mold? At this rate, it won't even be out until xmas next year! And by that time, i will have lost all interest in the bikes. Oh well. And to even think I did that mod for Chromia…all in the name of the anticipation for the combined mode.

I'm glad I waited on buying Chromia now. I nearly caved in and bought her today because Kapow Toys have got her in stock but if there's no official combination then there's no point to owning those monstrosities. Sorry girls, your going to be left on the shelf!

I'm starting to doubt we'll get the purple bike. At Botcon she was coming and was to be a remold of one of the other bikes and they would combine. At SDCC they have plans but she won't combine. There's no pictures of her so I think if Purple ever shows up, she'll be a straight repaint right at the tail end of the movie line. Logically, the combining thing was going nowhere. Chromia was wave 2, Arcee is wave 5 and there's no prototype to show yet for Purple. There's no way a combiner would be realeased with such big gaps between components and the third part not even done yet!

Bludgeon & Lockdown are definite buys. Why is Brawn a deformed movie toy and not a Classics / Universe mold?

Thanks for the pics!
Like the masterpiece ones but my wallet is not only crying its dying of starvation

I'll lend my Photoshop to the cause and clean some of this up:

Any bigger/clearer photos out there?

Ratchet looks to have some really long legs there… I think he might wind up being a tall Deluxe (stands to reason, if he is supposed to go with Lockdown).

fuck yeah for dirge…he looks AWESOME!!! and alot of the g1 named characters look pretty dope…wonder what the next series will be though…everything being up in the air has me curious about what toys will be on shelves next fall…they've gotta be designing stuff now or else it wont be out…

*sigh* What?! No combined bikes mode? That's why I got Chromia! OMG! And the 3rd bike isn't even made yet, so even if it comes out late next year, there won't be any reason to get it. I guess I won't be getting Arcee then.

I'm gonna probably get all of them minus a few

were there any pics take on scout breakdown