Here is another Transformers Revenge of the Sighting for you all – before the street date has even arrived, Deluxe Wave 2 has begun to reach stores! HighCaptSpock of our 2005 Boards managed to find and purchase Wave 2’s Smokescreen a the Kent Target in Washington state. Further evidence from a west coast based seller on Ebay suggests that the whole of Wave 2 – which includes a repack of Soundwave, plus newcomers Chromia, Desert Blast Brawl and Wheelie – has also been released. 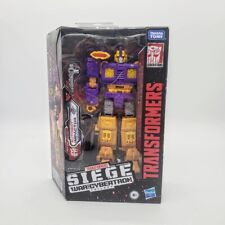 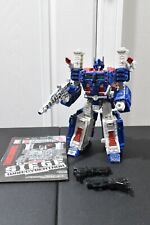 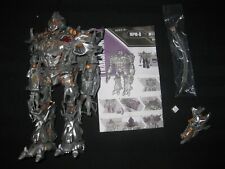 All i've seen are legends at walmart (not worth the fight) and scouts at walgreens (not worth the price). Really, the jump in complexity and quality between scout and deluxe is remarkable. Movie scouts seem like big legends, and Walgreens is charging deluxe price. Pass!

I'm still wondering it wave 2 will hit most stores on the 30th. Anyone have a list of what is in wave 2?

According to that one flyer we got for the overseas midnight launch, Desert Brawl, Smokescreen, Chromia, and Skids.

I'm still wondering it wave 2 will hit most stores on the 30th. Anyone have a list of what is in wave 2?

I checked the other Target around here … nothing!

Either today or tomorrow, I'm going to my local target and I'm not expecting to see the ROTF toys. But they did had their Universe TFs on clearance lastweek.

I placed an order for ROTF Soundwave from Walmart two weeks ago. They still have not inform me when it will be ship.

Saw Smokescreen, Preview BB, and Breakaway at the Potomac Yard Target in Alexandria, VA. Passed on all three

They're pretty "out" by now.

Yea i picked up Rampage and Soundwave there.

My local walmart in Harleysville PA had these last week, and I think one of the other members in my area argued with management after I reported the find, and bought a couple of the wave 2 deluxes. I think stores are getting the first 2 waves in for launch.

Saw Smokescreen, Preview BB, and Breakaway at the Potomac Yard Target in Alexandria, VA. Passed on all three

They're pretty "out" by now.

caint wait either when i go to walmart on the 29 at 5:00 pm im going to get those toys like a maniac with my cus megatron and optimus are going to be in my house hahahahahhahahhahahahhahahahhaah.

Still havent seen the first ROTF figure in my area, and I make my rounds almost everyday to check. It's getting frustrating.

If I'd have seen this thread earlier, I would have checked Target here today.

The Walgreens down the street has DepthCharge, DirtBoss and a few of the other little ones with the ROTF logo. Are these not supposed to be out yet? They were cool, but $10.99 each, so I left them alone.

I checked the other Target around here … nothing!

Still nothing around here

I haven't seen anything either just animated stuff!

But, I suppose alot of people haven't either, But at least i will soon be able to grab Optimus Prime, Long Haul, Skids and Mudflap and take them to their new home!

Can't wait for revenge of the fallen

Still nothing around here

Time to get desert Brawl!

I still haven't seen a single RotF item. I must live in the wrong part of Washington.

So I'm guessing if wave 2 is hitting then that means Skids will be out yay!

I guess I'll be getting Wheelie and Chromia from wave 2.