TVShowsonDVD.com is reporting that Paramount Home Entertainment will be releasing Transformers Cybertron: The Ultimate Collection on July 22nd, 2008. This DVD box set will apparently contain the entire Cybertron series of 51 episodes. No box art or information on extras is available yet, but the DVDs will be presented in full screen format with at least English audio. The running time given for the contents is 19 hours and 4 minutes. We’ll update the news as box art and other information are released. 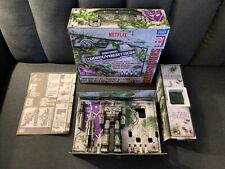 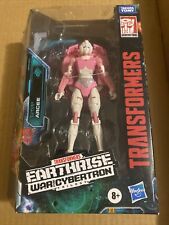 I never saw how Cybertron ended… Jetix Latinamerica started with reruns after Starscream's plot to overthrow Megatron and Thunderblast/Chromia's introduction. So consider this boxset bought.

I liked the series. Wasn't super-mega-awesome, but I found it enjoyable. I'll be trying to pick this up if the wallet allows.

I just recently got the Armada Box sets and I have the Energon DVD's that had Super Optimus Prime one,Megatron on another an third energon Omega Supreme!

cool, ill get it and finally see it all.

Word. I'm gonna set this up for pre-order so it'll get here quick. also, the quicker paramount gets my money, the more likely they'll release an Energon set, which I would also like to see all the way through.

And Witchblade too? Awesome.

I actually liked the characters on armada, and felt the end of that series was pretty good. The worst thing about armada was the beginning of energon that tried to tie Emo space death prime into new happy earth fat prime.

Count me in the "will buy" group.

And yes, I too would like to see Energon and RID on DVD someday.

In my opinion, Armada started off quite slow and sluggish, but slowly gained momentum, and became awesome, much akin to Gundam SEED. Energon, on the otherhand, started off somewhat awesome, but about half way through became sour, and bad, as the show changed focus. Which is quite reminisant of Gundam SEED Destiny, which started off good, and about half way through, became shiiiii…..tttttterrible(Energon definately did not have the same kind of drop of quality as GSD though).

Yeah, I was gonna buy the Armada sets from Rhino, forgot, and next time I went to the store, they were sold, same with all of Rhino's releases. So I definately gonna pick up the Cybertron release once I see it.

I think the AEC Trilogy is awful for the most part, so this Cybertron box set is a very easy pass for me, unless I see it on clearance for $20 sometime. Nevertheless, I'm glad to see another TF series make it to DVD.

Just for reference though… you have no problem with the RID & Japanese G1 sets being PAL?

The Japanese Headmasters (Metrodome) version is PAL (Region 0) and played fine. As for the RID set, I have no idea. The Masterforce series is PAL (Region 2) and it will only play on a hacked DVD player or pc that is set to region 2.

What is your DVD player's make/model? I'm still ticked off that my Panasonic DVD recorder doesn't have a region hack.

This is awesome. Doubt it'll have the Japanese audio or any worthwhile extras,though. Being on the anime box-set buying rampage I've been on as of late, this is especially nice.

I do find it somewhat funny that out of the Unicron Trilogy shows, the only two to have full series DVDs are the worst (Armada) and the best (Cybertron).

I have to get this, my favorite series and always will

Now we need Energon. What would be REALLY nice is to have the missing episode from Energon… Though I think it was never dubbed… Hrm…

I actually, unknowingly, got a really inexpensive region-free DVD player when our old DVD/VCR died on us. It's a Philips, cost maybe $40 and I discovered online that through a few keypresses, it can be made region-free. Once I did that, I imported RiD and the Japanese G1 series' from Amazon UK. So, it's not as expensive to do it as you might think and I think it was totally worth it.

Cool. I just recently bought a $40 up-converter DVD player to go with my HDTV… I'm going to have to go online and check to see if it can be made region free.

Just for reference though… you have no problem with the RID & Japanese G1 sets being PAL?

Joe Moore explained the rights went back to Hasbro after Sony shut down Sony Wonder. Evidently Hasbro hasn't found somebody to release a set yet, or nobody is asking.

Ah, good to know. I'm going to guess the later on that one though.

Yeah, the Kid Rhino masters are the best we have in terms of visual quality, and would probably be the basis of any potential HD release (though I would question why anybody would bother, given how low-detail the G1 cartoon is).

Well, than unless there's something better somewhere there really wouldn't be any point in buying a new set.

Good news. Cyb is the best of the AEC trilogy IMO. Now they just need to release Energon…

Ah, duh! Don't know why I was thinking Paramount released the G1 Movie last year (was it last year? don't remember…), but it's strange that the rights would stay in limbo for so long.

So, with the broadcast masters being of such poor quality I guess the ones used by Kid Rhino are the best we're going to get huh?

Joe Moore explained the rights went back to Hasbro after Sony shut down Sony Wonder. Evidently Hasbro hasn't found somebody to release a set yet, or nobody is asking.

Yeah, the Kid Rhino masters are the best we have in terms of visual quality, and would probably be the basis of any potential HD release (though I would question why anybody would bother, given how low-detail the G1 cartoon is).

Hmmm, I've already got the overseas version, however if the price is right I'll buy this set also.

This series got me back into Transformers since G1. Had to get the whole line including some Galaxy Force only guys. Enjoyed watching the whole series and want to see Galaxy Force now. Got RID from Sendit last year and Armada Japanese collection. Saw most of Energon online. Can't tell if my Sony G1 More than Meets the Eye Pilot Series is different than the Rhino one. Haven't watched them at the same time to tell a difference. The Sony one was a Costco exclusive that was free with the 20th anniversary movie.

Eh. I'll buy it, simply because the CGI TFs were so damn awesome.